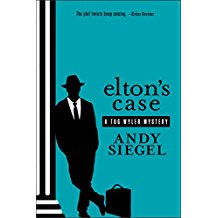 This is a legal mystery.  That does not infer any others are illegal, just that this mystery is centered around a personal injury attorney.   Tug Wyler appears to be respected by everyone but his secretary.   He finds himself with a client that mystifies him.

I found the book occasionally tedious with some things over explained and other that didn’t need explained.   Elton, the client, was mysterious.  His law suit against the city was the basis of the plot.   The author did an excellent job in presenting Tug’s torn sentiments regarding the client.

The book is one of a series and all seem to be differing legal cases.

I have mixed feelings on the book.   It held my interest but did not captivate me.

This book may have been received free of charge from a publisher or a publicist. That will NEVER have a bearing on my recommendations.
Posted by wbentrim at 1:44 PM No comments: Links to this post

All the Beautiful Lies by Peter Swanson

This is a soap opera-ish mystery.   A man is murdered and his son finds out that his father may not be exactly who he thought he was.

Harry is a somewhat hapless, very recent college graduate who discovers unsettling things about his Dad and his stepmother.

The book does an now and then type of flip flopping.  We get current behavior in the now and the back story in the then.   It sounds cumbersome but it works.

Several murders, a set of attractive twins, a hapless college grad, a sex offender, a model and a psychopath provide a wealth of characterizations that Swanson manages well.

I enjoyed the book and recommend it.

This book may have been received free of charge from a publisher or a publicist. That will NEVER have a bearing on my recommendations.
Posted by wbentrim at 4:37 PM No comments: Links to this post 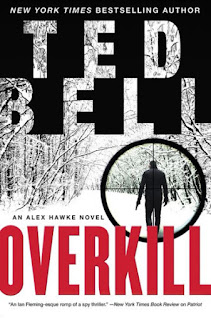 This is a very current book.   It has references right out of the headlines.  It is loaded with action and includes a smattering of sex.   Lots of high tech stuff, submarines, tanks, trains, fancy cars and weapons galore.  I really expected to like this book after having read previous Ted Bell books.

Sadly I was very lukewarm about this book.  It was a lot of flash and glam but very little substance.   The characters were so bold as to be comic.   It came across as a tongue in cheek action book rather than an actual action book.

Vladimir Putin finds himself on the outs with the oligarchs.  He needs large cash infusions to regain power.   Alex Hawke, the main protagonist, has thwarted Putin in the past so Putin puts a scheme into play to keep Hawke at bay.

There are a lot of colorful characters and predictable action.  The most interesting part of the book were the Swiss bunkers one of which was Putin’s hideout.   I was unaware of the warren of bunkers the Swiss have throughout their country.  I Googled it and found it very interesting, sadly more so than the book.

I hope the quality of this book is merely a hiccup in a string of books I have enjoyed.  There were times it was repetitious and other times where it just wasn’t tight.  Overall the plot was acceptable but for me the book was just average when I have come to expect above average from .  Keep in mind this was an uncorrected proof and that could have a bearing on the repetition and the tightness of the prose.   This may easily move up to four or five stars upon release.

This book may have been received free of charge from a publisher or a publicist. That will NEVER have a bearing on my recommendations.
Posted by wbentrim at 2:45 PM No comments: Links to this post

Two Girls Down by Louisa Luna

This was a child abduction mystery which is hard for me to read.  There is a special place in hell for people who prey on children.

The story is a good mystery.   The characterizations were well done.   The author clearly showed foibles and strengths and did a nice job showing emotions.

The two main protagonists are flawed and believable.

I enjoyed the book and recommend it.

This book may have been received free of charge from a publisher or a publicist. That will NEVER have a bearing on my recommendations.
Posted by wbentrim at 4:50 PM No comments: Links to this post

All Around the Town by Mary Higgins Clark

It has been a long time since I read one of Ms. Clark’s books.   This one was every bit as good as I remember.  It is an intricate mystery with psychological overtones.

Laurie is a precocious toddler who finds herself in an untenable situations.   Years later her mental well being is challenged by her childhood.   She has a compassionate and close sister who helps her through her difficulties.

The trouble with a mystery is avoiding including spoilers.   This is a good mystery with well developed characters and sufficient tension to want to turn to the next page.

This book may have been received free of charge from a publisher or a publicist. That will NEVER have a bearing on my recommendations.
Posted by wbentrim at 1:11 PM No comments: Links to this post

Power Down by Ben Coes 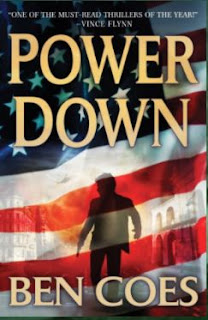 I am new to this author.  He does not shy away from violence or strong opinions.   This story is one of terrorists attacking our economic infrastructure.

The main characters in the book deal in financial atmospheres that are understated by rarified.  The main character ends up being Dewey Andreas.  Dewey was Delta Force but was forced out by some questionable circumstances.  His background allowed him to become a major force in stopping the terrorists.

I found the near closing scene with a major terrorist player a bit perplexing regarding an inkling of conscience after an entire book of merciless behavior.   Merciless is also an apt description for Dewey.

I had a touch of difficulty with the level of graphic violence however it did not deter from my enjoyment of the book.

This book may have been received free of charge from a publisher or a publicist. That will NEVER have a bearing on my recommendations.
Posted by wbentrim at 1:33 PM No comments: Links to this post