Michelle Maxwell and Sean King are Baldacci’s characters of choice

in this novel.  An incident in Sean’s past has dramatically unanticipated results decades later.  Those results involve the President, First Lady and several children as well as a grieving, revenge and anger filled father.

Sam Quarry is a larger than life character who inspires admiration and despair over his state of mind.   The story offers conflicting feelings regarding the lengths a parent would go to protect a child.  Baldacci successfully crafts a likeable villain.

Likeability which I will note has gotten me some sour response when I have suggested that likeability impacts my feelings on books. A likeable characters does not have to be the good guy.  If I can’t connect to the characters then the plot better be truly masterful because for me, the character connection is paramount.

Baldacci can do it all, provide an exemplary plot and likeable characters, even the villains.

This book may have been received free of charge from a publisher or a publicist. That will NEVER have a bearing on my recommendations.
Posted by wbentrim at 1:00 AM No comments:

THE PEOPLE’S POLICE by Norman Spinrad 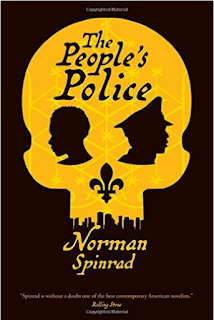 This book was amusing, irreverent, insightful and outrageous.  A quote from page 37 provides insight to the author’s style, “Never attribute anything to conspiracy that can be explained by assholery.”   The quote won’t fly on my Amazon review but for my blog, my rules.  This is not a book for the faint of heart or those who oppose satirical writing  or who are offended by profuse profanity.   is the setting and the people provide stupendous color.  Martin Luther Martin is a swamp rat who crawls out of the swamp and changes the complexion of .

Spinrad is a philosophic game changer.   His commentary on society and his views all expressed by his diverse characters make one consider the depth of depravity in our elected officials.  Ignoring the social commentary, the book is a grossly depicted view of and the outlook of those who choose to live there.

This was an excellent book that can be read as just an entertaining story about a in the not to distant future or a treatise on social mores and chicanery.

I enjoyed the book and recommend it to anyone who isn’t easily offended.

Why As an Author You Should Always Use a Professional Editor.

This is an excerpt from CreateSpace, my on-demand publisher.   They offer editing services but regardless of who you use, my experience has shown the value of a professional editor.

1) Immersion: Readers lose focus and can't absorb your writing if they're distracted by grammar, punctuation, and typographical errors.

2) Professionalism: You get one chance to make a first impression. How will readers--who are now reviewers--perceive your book if you haven't had an objective, second pair of eyes polish it before publication?

Posted by wbentrim at 2:00 AM No comments:

The Stranger By Harlan Coben 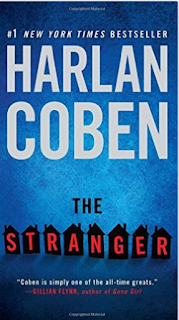 Lies and then more lies some so self serving they end up denying the existence of others.   Coben sets the stage with a deluded vigilante group that stuns a lawyer into lawlessness.

Blackmail and deceit fuel the fires of this story.   Coben once again tightens the strings of tension by the disappearance of a loved one.   Adam, the husband, does his best to find his missing wife and discovers the stranger has disrupted far more lives than his own.

Again I will state that Coben has a twisty mind. I like how he is able to keep the excitement going throughout the book while keeping the tension tight.  His ability to hide the true perpetrators is truly masterful.


This book may have been received free of charge from a publisher or a publicist. That will NEVER have a bearing on my recommendations.
Posted by wbentrim at 12:14 PM No comments: A meteor strike sends Wyman Ford on a mission of discovery while it sparks a flame of greed in Abbey.   Ford discovers that radioactive jewels are not the problem while Abbey discovers that things are not what they seem.

Ford is a mysterious figure that has ties to the CIA and seems very competent.   The Abbey character shows a lot of growth and in some ways this is a coming of age for her in this book.   A child of color in a lily white community, Abbey is frustrated and feels misunderstood.   Her personal growth in the book is just shy of being miraculous.  However just as convection oven bakes faster, if you subject a bright directionless teen to lots of stress and pressure they can collapse or grow faster.  Abbey grows faster.

writes a great story and always has an intellectually challenging twist.

This book may have been received free of charge from a publisher or a publicist. That will NEVER have a bearing on my recommendations.
Posted by wbentrim at 10:53 AM No comments: 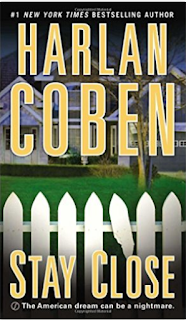 Lost loves, lost time and lost bodies are all part of this Coben mystery.  Set in and around with nice touches like Lucy the elephant.  Coben provides good background as well as an excellent plot.  Missing persons turns into a possible serial killer and Detective Broome finds himself tied to finding a solution.

Coben has a twisty mind. I like how he is able to keep the excitement going throughout the book while keeping the tension tight.  His ability to hide the true perpetrators is truly masterful. 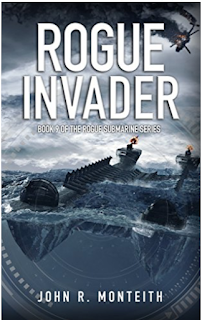 Once again John Monteith has cast a story touching on current events.    The characters are suffering some pangs of conscience with this mission.   They are finding that their role as mercenaries is far more complex than they originally though.   Economic issues in the European Union and ’s financial difficulties provide the connection to current events.

Jake Slade and Terry are now joined by another leader, one who was an adversary in a previous book. Volkov’s demeanor is colored by a dark depression that seems characteristic of Russian characters.  After events in the last book, he is fighting with a drop in self confidence.

Monteith’s background brings the taste of realism to what might otherwise be seen as flights of fantasy.   Knowing that his underpinnings provide him with a uniquely realistic experience for this type of book makes readingi t much more enjoyable.

This was an exciting book and I recommend it.