Fire in the Blood by P.N. Elrod 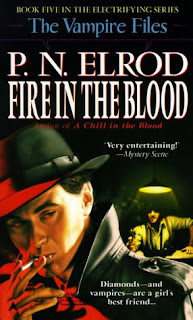 This is the 5th in a series of depression era detective stories. I mentioned in the last Elrod review that when I ran across a detective series set shortly after prohibition with a hard nose by soft hearted P.I. as the main character I tried it out. Jack Fleming the main character is a vampire. In this book he confronts areas of his condition and personality that cause him great emotional stress. The story lines are simplistic and even the style seems dated but that doesn’t seem to detract from the enjoyment. If you plan on reading it on a plane, take another book along unless it is a very short flight. It is a very quick read.


Body of work of P.N. Elrod
Site of P.N. Elrod: http://www.vampwriter.com/
Posted by ibpurpledragon at 8:00 PM No comments:

Protect and Defend by Vince Flynn 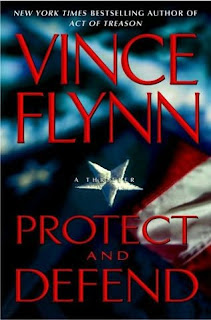 If you are into Old Testament justice, you will love Vince Flynn’s work. In an action laden format, set as about as current as you can get in today’s world, Mitch Rapp is an “out of control” CIA operative who takes terrorism very, very personally. Flynn’s Mitch Rapp makes John Wayne look like a reticent sissy. He believes in himself and his country and hates politicians. This is a very sobering book on the intricacies of the Middle East political arena. I have read Flynn, I have been able to find. I have enjoyed them all, this is no exception.

Body of work of Vince Flynn 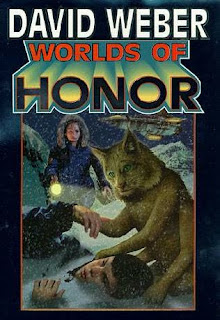 Number 2 in the Worlds of Honor Series.

Five stories from the David Weber Honor Harrington universe.
“The Stray” by Linda Evans.
“What Price Dreams” by David Weber
“Queen’s Gambit” by Jane Lindskold
“The Hard Way Home” by David Weber
“Deck Load Strike” by Roland J. Green
I don’t usually read short stories. I find my subscription to Analog easily satisfies my appetite in that area. I am really glad I read this anthology. Linda Evan did a terrific story on treecats as did David Weber. Lindskold did a good political piece on Manticore. “The Hard Way Home” gave us another glimpse of Honor which is always good. “Deck Load Strike” was the weak link. It was ok but didn’t hit me like the other four stories. Treecat stories will apparently always appeal to me as those on Honor Harrington, the space faring Horatio Hornblower. Weber’s skills in entertaining are difficult to surpass. Read this book.

Body of work of David Weber

Review from Publishers Weekly
It is Weber's wondrous treecats, not his popular woman warrior, Honor Harrington, who ultimately dominate this five-story collection. The book features the work of four authors, despite the solo cover credit, and is an obvious attempt to provide something for every taste in Weber's fandom, as was last year's More Than Honor. In the space-faring universe of Weber's novels (In Enemy Hands, etc.), Honor defends her gallant Star Kingdom of Manticore with the irresistible classiness of the British military and the legendary brassiness of the U.S. Marines, as well as with the quasi-telepathic aid of her treecat, Nimitz. In Weber's "The Hard Way Home," an episode drawn from Honor's early career, and in Roland Green's lively and inventive (if Honor-less and treecat-less) "Deck Load Strike," the Manties' opponents are the creepy People's Republic of Haven and their nasty allies, wittily modeled on Earth's familiar petty dictators, drug lords and religious fanatics. Except in the Green piece and in "Queen's Gambit," Jane Lindskold's soggy coming-of-age tale about Honor's monarch, the empathic alien treecats of Honor's home planet steal the show. Even though Honor is yet unborn and thus missing from the action in Linda Evans's "The Stray" and Weber's other entry, "What Price Dreams?," both stories appealingly oscillate between human and 'cat sensibilities in the earliest stages of the treecats' poignant association with their human partners. All five stories, though uneven taken together, provide intriguing background glimpses of Honor's?and Nimitz's?worlds.
Copyright 1998 Reed Business Information, Inc.

David Weber’s web site is under construction.
Posted by ibpurpledragon at 11:21 AM No comments: 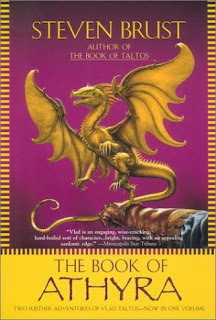 I think combining these two novels under one cover was a good idea. Athyra would not have ranked high as a stand alone. I’m not quite sure why but I didn’t care nearly as much for it as I have the rest of the books. Vlad spent too much time in introspection, I think. Orca got back to having a little more action and interplay between characters. I found it much more entertaining. There are quite a few references to the previous stories so I would try diligently to read the preceding books prior to these two. Orca contains little tidbits that very innocuously tie the series tighter. I also liked the easily seen comparision to the predatory practices of many of today’s corporations so clearly shown in the sub-prime mortgage debacle. Combined I have to recommend you read this book.

Body of work of Steven Brust

Web site: http://dreamcafe.com/
Posted by ibpurpledragon at 11:19 AM No comments:

is one of my favorites. Note, I have a lot of favorites. In this two book series she writes of a society plagued with global warming and water shortages. Sounds al

l too familiar yet the books are several years old. In addition she addresses many issues of women, their rights and lack there of. Again, sounds very contemporary. Both books are good, you care about the characters. I don’t think I have ever read anything by Barbara Hambly that I haven’t recommended. These too books are no exception, read them.

Body of work of Barbara Hambly

Review of Circle of the Moon: http://www.curledup.com/circmoon.htm

Web site: http://www.barbarahambly.com/hambooks.htm
Posted by ibpurpledragon at 11:27 AM No comments:

In Fury Born by David Weber 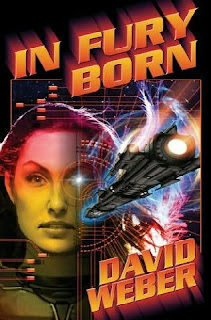 In Fury Born includes the complete novel, Path of the Fury. . I knew it when I bought it and bought it anyway. Once again a female protagonist is put into an untenable position and has to find her way out. Weber definitely favors strong, able, confident women. I think much of his work features excellent role models for women of all ages. Keep in mind this is the opinion of a guy who likes strong, confident, successful women. This book in essence provides the setting and causality of Path of the Fury. There is a smidgeon of Greek Mythology involved which combined with the presence of artificial intelligence adds a nice twist to the plot. I loved the book and strongly recommend it.

Body of work of David Weber

David Weber’s web site is under construction.
Posted by ibpurpledragon at 12:45 PM No comments:

The Laws of Our Fathers by Scott Turow 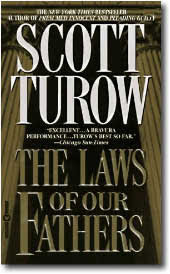 Another courtroom drama, Turow throws his judge into a precarious position of dealing with her past and the present trial and characters involved in it. If you are a fan of Turow and courtroom dramas, you will probably like the book. Like as opposed to love. I found it ok by my taste, ok to read if nothing better was at hand. My wife liked it but did not love it and she has loved some of Turow’s books.

Body of work of Scott Turow

Web site: http://www.scottturow.com/books/the-laws-of-our-fathers/
Posted by ibpurpledragon at 12:13 PM No comments:

I found http://www.davidbdale.wordpress.com the other day. It is a site where no novel is longer than 299 words. Think about it, convey what you mean succinctly. That immediately leaves me out as verbosity is my trademark. Regardless, I joined the neighborhood. I read some posts and suggest that you too read them. In an age of escalating verbiage, this site is refreshing to read and enjoy. Now if we could just get computer programmers to realize less code rather than more is better.
Posted by ibpurpledragon at 2:57 PM No comments:

The Shadow of the Lion by Mercedes Lackey, Eric Flint and Dave Freer

Mercedes Lackey ranks as one of my favorite authors as does Eric Flint. I never heard of Dave Freer until this book. Pseudo or alternative history is always fascinating. This story takes place in Venice, the city state, during the Holy Roman Empire time period of the 1530s in another or parallel universe. The intrigue and Machiavellian machinations are true to that time period. The use of magic is unique to the alternate world. A very rich, very involved plot with good characterizations keeps you glued to the book. The second book in the series is “This Rough Magic”. It is supposedly going to be a 5 book series the Heirs of Alexandria but the 2nd book was published in 2003 and there appears to have been no further work on the series. The book works well as a stand alone novel so don’t let the lack of a finished series stop you. Read this book, you will enjoy it.