Sword of God by Chris Kuzneski

Novels that read like current events are frequently frightening. This portrayal of an orchestrated mass murder to unite the diverse elements of Islam is very disturbing. The disturbing aspect is that it seemed eminently probable.
Jonathan Payne is larger than life and a good combination of Bruce Lee and John Wayne. His side kick D.J. Jones is a tad more believable. The novel does a nice job in the portrayal of feared elements both abroad and in our own government.
Sadly some of the behavior of those who wish this nation harm lead to an acceptance of deplorable means to stop them. This is a sobering look at terrorism and what it creates in both perpetrator and victim.
This is slam bang, thank you mum action and violence that is entertaining, easily read and digested but not for the faint of heart.

Body of work of Chris Kuzneski

The Cypress House by Michael Koryta

This is a story of the great depression, the despair and the illicit means some used to survive. It is a love story in many ways as well as a crime and violence filled occult tale of how people can be trapped in situations beyond their control.
Michael Koryta is an artist. His characters have such life that it is simplicity itself to visualize them and their surroundings. I read the book while in Florida and found myself looking around for some of the scenery or characters.
The story was set in a time of depression and post war trauma. That setting resonated with today’s recession and returning veterans. War changes people and Koryta captured that essence of humanity.
I also liked how he showed a love between two unrelated men that had nothing to do with gender bias or sexual preference. Sometimes the depth of friendship is love that has absolutely nothing to do with sexuality. That type of relationship seems practically taboo in contemporary fiction.
Arlen Wagner’s skepticism of his own talent promoted belief in what he experience, much more than a simple presentation of that talent.
This the second of his books I have read and I will be actively seeking out the rest.
I highly recommend the book.
Body of work of Michael Koryta
Web site: http://www.michaelkoryta.com/
Posted by ibpurpledragon at 8:00 AM No comments:

The Treasured One by David and Leigh Eddings

This book is a continuation of the series, The Dreamers. Two sets of gods, a younger and a an older are attempting to deal with a insect like genetic altering villain who creates minions on the fly. The elder gods recruit humans from their domains to deal with the villain since they are incapable of taking life.
I enjoy the Eddings work. This series seems to be too much like light beer, less taste and definitely less filling. I like the characters and I like the verbal interplay. The plot seems to be a replay of the previous book as opposed to growing from the last book. The plethora of omnipotent beings is a bit amusing but not overly so. Lots of fighting, spectacular deeds by unlikely heroes and some pontificating on the greed of some organized religion. It appears to be more of a young adult book than I had anticipated. A very light but never the less entertaining read.
Body of work of David Eddings

So Cold the River by Michael Koryta

A down and out want-to-be Stephen Spielburg find himself immersed in water, deceit and confusion. A trip to a famous resort for a simple project lands him in the most danger fraught period of his life.

Eric Shaw is a man with an enormous ego that has been shattered by failure. His self loathing promotes his driving of those who love him to despair. Koryta truly paints a man who conspires to destroy himself. The characterization is poignant and colorful. Small towns with secrets are a frequent topic of scary novels. This isn’t scary like a slasher film but more thought provoking scary.

The books is primarily an exploration of Eric’s personal redemption but ancillary characters such as his wife, Claire and Kellen Cage are also well done. I particularly enjoyed the quirky Anne McKinney looking to the sky for personal redemption.

Josiah Campbell was almost a stereotypical red neck haunted by a desire to be someone and no ambition to get there. This book was overflowing with memorable characters that added both their own nobility and despicable behavior.

I highly recommend the book.

Body of work of Michael Koryta

A Meeting At Corvallis By S.M. Stirling 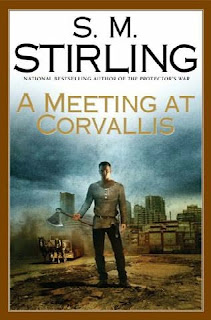 There is little change in A Meeting at Corvallis. Technology is still being suppressed by some unknown force. Beliefs and will seem to be gaining strength and becoming more real. The Protector’s
consistent enmity leads to war. Rudy and Mathilda’s relationship continues to grow. War, death and destruction with a peak of light at the end of the tunnel highlights the book.
I really enjoyed the characterization of Mike Havel’s nobility. The Rangers and their Tolkien fascination is both amusing and understandable. I thought the Stockholm syndrome in regards to those
forced to live under the Association’s rule was a bit overdone. I did like the flashes of humanity seen in some of the staunches villains and I lamented over the closing act.
I recommend the book. I think Stirling has done a masterful job with this post apocalypse series.
Body of work of S. M. Stirling
Review
Web Site
Posted by ibpurpledragon at 8:00 AM No comments:

The not too distant future is the setting for Lt. Eve Dallas and her adventures. The entire series I have read so far is focused on homicide and the mystery that surrounds each murder. The image portrayal of each victim leads Dallas on a nasty chase through the August heat of NY. Her husband Roarke, discovers some answers  a mystery he didn’t realize existed.
Nora Roberts’ work as J.D. Robb is always entertaining. There is no mental stretching or need for personal change or improvement. She provides entertainment, enjoyable and disturbing simultaneously. I enjoy Eve Dallas’ relationships. Her relationship with Roarke is believable. I also like her hard ass attitude. This author deals well with emotions and successfully elicits an emotional reaction to her writing.

I recommend the book and the series.


Gideon Crew faces trauma early in his life. The events surrounding his father have long lasting impact. As an adult, Gideon blithely establishes a relationship with a government contractor to find a Chinese national with a potential game changing secret. Gideon discovers depths to his personality he never suspected as he faces both a hideous personal secret and an unrelenting nemesis.


Preston and Child have wide ranging talents. They do create some memorable characters. Agent Pendergast couldn’t be more different than Gideon Crew.   To get a mere glimpse into their work look at my reviews, Fever Dream, Deep Storm and Riptide.  The book will fuel any action junkie’s desires and yet it still provides a thought provoking plot. Gideon Crew will be a fun character to watch in future Preston and Child books.   I truly love ARCs


I recommend the book.

Their web site:
Posted by ibpurpledragon at 8:00 AM No comments:

Harry Dresden is a wizard for hire, the only one in Chicago’s Yellow Pages.
His latest client is Mab, the Winter Queen of Faerie. She makes Harry an offer he literally can’t refuse. Harry has to find out who killed the Summer Knight or die trying.

Butcher does an exceptional job making wizardry seem normal. His characters are quirky and surprisingly believable. I enjoy his plots, I have yet to figure out before hand who did what. Harry has ethics and a strong moral compass. He is an eminently likeable protagonist.

I highly recommend the entire series. You will be seeing more as I have finally purchased all the ones that have currently been printed.


Body of work of Jim Butcher

Web Site:
Posted by ibpurpledragon at 8:00 AM No comments:

The Sword of the Lady by S. M. Stirling 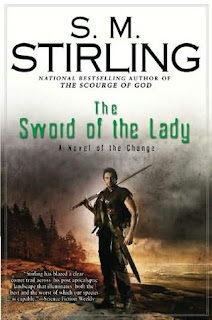 I’m beginning to think it is the never ending story. Don’t get me wrong, I love the books but I’m careless about checking the author’s site to determine if this book is finally the culmination of the story. Through trials and tribulations Rudi Mackenzie finally claims his legacy in Nantucket. Along the way, Rudi’s personality and charisma have earned him allies to armor against his implacable foes.

Once again I have to admire the way Stirling stirs the soul. He creates likeable characters and despicably depraved villains. I normally read three or four books simultaneously probably due to my limited attention span. I find it nearly impossible to put down one of Stirling’s books once I start it. My only beef is that the time between books is painful. I want to read more. Once again the book intersperses intense action with in depth human interaction leavened with philosophic pondering.

I highly recommend the book.