Seduce Me in Shadow by Shayla Black 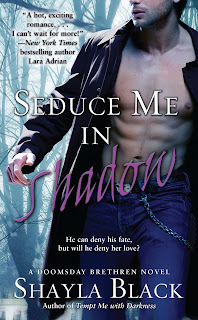 Romance and magic intertwined provide the setting for this romance. Caden Mactavish has struggled all his life to be “normal”. He has done his best to avoid his family’s magical heritage. He is thrust into the conflict between good and evil when his brother’s wife is kidnapped severing their interconnected souls resulting in Lucan’s desperate illness. Caden’s search for his missing sister-in-law is complicated with his fascination with Sydney Blair, a tabloid reporter.

The Doomsday Brethren were introduced in the first book of the series, “Tempt Me With Darkness”. The Brethren and their magical talents stand between humanity and the forces of evil.

Ms. Black portrays luscious women and robust men. Unless this type of magical romance has sprung full blown from the heart throbbing consciousness of the teenage psychic, I have been pretty much blithely ignorant of the genre. The action and characters are solid but the romantic overtones that permeate the book are just not my cup of tea. Keeping in mind my age and gender, I suspect this book will be very popular as well as the prequel and sequel. I can see my teenage niece devouring it and that is to whom I will give it. For myself, I am going to start avoiding books that have covers featuring roughly shaved studs with no shirts, I am beginning to realize that the interior story is most likely not going to be one of my favorites.

Body of work of Shayla Black

Site
Posted by ibpurpledragon at 8:00 AM