The Last Patriot by Brad Thor 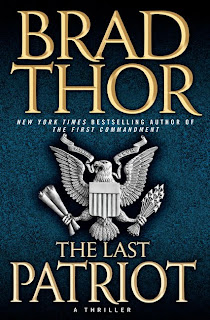 International intrigue at it’s best. Scot Harvath is contemplating retirement. Apparently events in a previous book have led to a desire to settle down with his lovely Tracy. A rogue CIA assassin inadvertently draws Scot into his demented Islamic conversion debacle. The resultant train wreck violence provides a charging read.
I enjoyed the Scot Harvath character. I enjoyed it enough that I got online and ordered four of his last six books. I am going to have to track down the last two. Once I find an author that is impossible to put down, I want to read him until one of us drops. Considering the state of today’s terrorist environment one has to wonder if the author’s suggestion of a Presidential assassin shouldn’t be a realistic option. It is so depressing to see the fanatics so frequently succeed in their terroristic acts. Perhaps if they realized that terror could be visited upon them as well, they might reconsider their zeal. This was a good book with lots of action and stood alone satisfactorily. My ordering the prequels is because I want to know what led to many of the incidents in the book. Scot Harvath is an acceptable hero, strong beliefs with a realistic fallibility.
I highly recommend the book.
Body of work of Brad Thor
Review:
Site:
Posted by ibpurpledragon at 8:00 AM