The Forgotten by David Baldacci 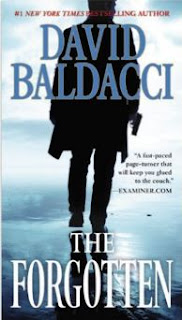 I found myself looking at John Puller and thinking Jack Reacher.   Baldacci's character doesn't head butt but...he is bad ass.   Puller, an Army Criminal Investigator, finds himself, once again, involved him affairs that at best can be peripherally related to his oath of office.   Instructed by his dementia laden, father, Puller Sr., John finds him self in looking for trouble.

This is an action packed action adventure.   I would recommend blocking out enough time to read it at one sitting rather than annoying your loved ones with major distraction over a period of days.

Puller has the no non-sense approach to life that is epitomized by Jack Reacher.   My apologies to both authors for their character comparisons but I get a strong, strangely familiar familial vibe that suggests that these two characters were siblings separated at birth.

Paradise is not what it seems and Puller sees sides of that he wishes he could erase from his memory.   Puller is a tough guy with a soft spot for those who are unable to protect themselves.   He does have more regard for social propriety and laws that the aforementioned twin.

The issue the book addresses is one of disturbing notion.   One can only hope that it is being dealt with in as firm a manner as it was in this book.

This book may have been received free of charge from a publisher or a publicist. That will NEVER have a bearing on my recommendations.
Posted by wbentrim at 9:53 AM