The Midnight Line by Lee Child 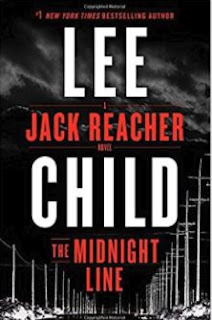 Midnight Line has gotten mixed reviews from my friends.  I’m not sure why.  It may be some ambiguous ethics from Jack but that should be a surprise.  Jack Reacher goes for results with an occasional blind eye to legalities.  There is a message that may not be palatable to all.  Sometimes the government and or military may be a factor in societal ills such as the current opiate crisis.  Child does not hesitate to dive in and express his fictional take on a current situation.

Reacher finds himself being told by several sources that he is avoiding some internal issue by his footloose lifestyle.   It is also suggested he is motivated by guilt.   I do not recall previous books dwelling on why Reacher is who he is with the exception of his upbringing.  Michelle Chang, of Make Me, has a very , very brief cameo.

Reacher becomes involved with another diminutive woman.  Of course his size means that most women would be diminutive in comparison.

Opiate addiction is addressed in the book as well as the economics of pharmaceutical malfeasance.

Violence and mayhem are expected in a Jack Reacher book and this book is no exception.

As in most Lee Child books, I suggest you block out some time so you can read it as fast as you will be driven to do so.   I recommend the book.


This book may have been received free of charge from a publisher or a publicist. That will NEVER have a bearing on my recommendations.
Posted by wbentrim at 2:35 PM