Spotlight on Robert McCaw's Death of a Messenger

Ever wonder how Koa Kane got his start? 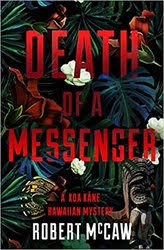 Death of a Messenger is the first book in the Koa Kane Hawaiian Mystery series by Robert McCaw https://robertbmccaw.com/   Revised and updated, it will be released by Oceanview Publishing on January 5, 2021.

Read my reviews of his 2nd and 3rd books, Off the Grid and Fire and Vengeance, no spoilers in either review, both of them 5 star mysteries.

On Hawaii Island, an anonymous 911 caller reports a body at Pohakuloa, the Army’s live-fire training area. Hilo Chief Detective Koa Kane, a cop with his own secret criminal past, finds a mutilated corpse—bearing all the hallmarks of ancient ritual sacrifice.

He encounters a host of obstacles as he pursues the murderer—an incompetent local medical examiner, hostility from both haoles (Westerners) and sovereignty advocates, and a myriad of lies. Koa races to discover whether the victim stumbled upon a gang of high-tech archaeological thieves, or learned a secret so shocking it cost him his life and put others in mortal danger.

Will Hilo’s most respected detective stop this sadistic fiend—or will the Pohakuloa killer strike again, with even deadlier consequences?

is the author of Fire and Vengeance, Off the Grid, and Death of a Messenger. McCaw grew up in a military family, traveling the world. He is a graduate of Georgetown University, served as a U.S. Army lieutenant, and earned a law degree from the University of Virginia. He was a partner in a major international law firm in Washington, D.C. and New York City, representing major Wall Street clients in complex civil and criminal cases. Having lived on the Big Island of Hawaii, McCaw imbues his writing of the Islands with his more than 2-year love affair with this Pacific paradise. He now lives in New York City with his wife, Calli. 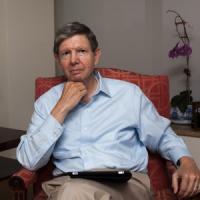