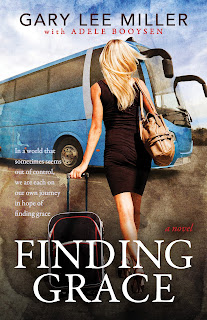 Finding Grace follows a young girl, Judith Lee, who grew up with her very poor grandmother, Grace, and grandfather, Virgil, in Nashville. She is bullied and mocked in school, but she is smart. She goes on full scholarship to Vanderbilt and upon graduation, moves to California, eventually starting her own tech company which becomes extraordinarily successful.


Grace calls Judith with a dying wish…for Judith to travel from Los Angeles to Nashville to come visit her. But there’s a catch...Judith must make the journey by bus.

Thank you for taking the time to answer these questions.

I have a BS degree in Secondary Education, but never taught. I went into sales and management before starting, growing, and selling several companies.

As a business owner, I wrote all our marketing manuals and materials, including radio and TV spots. I never considered writing a book until after losing Sharee. It became my way of processing my grief.

Although I keep an office, when I wrote Finding Grace, I would sit at home at the kitchen table. I wrote when, emotionally, I had the need. There was no schedule for when I would sit down to write. Sometimes a week or more would go by without writing, but there was a routine when I did write. I would sit at the end of my kitchen table with my favorite picture of Sharee facing me on the other end. On my right was the bay window where I could see the trees, birds, rabbits, and squirrels. Seeing God’s blessing of nature helped. Then I would bring up my Spotify playlist of favorite songs (almost 200) Sharee and I loved, with it playing very softly in the background.

Fortunately, I’ve never experienced writer’s block. When I was in the mood to write, the words for Finding Grace came easily. When writing Finding Grace, it was as if I were actually watching the characters in my mind on a movie screen as they talked with each other. And there were many times when it was challenging to keep up typing their back-and-forth dialogue. I felt like there was an angel on my shoulder, whispering in my ear. So, I listened…and wrote.

A plotline that is strongly character-driven. People are interested in other people’s stories, both happy and sad. A good story has a balance of tears of laughter along with tears of emotion based on a connection with the characters or their situations.

An old Chinese proverb says, “The journey of a thousand miles begins with a single step.” That was how Finding Grace came to be. With a single step. Unfortunately, the cause of that step was the passing of my wife of 45 years, Sharee, from leukemia. Thus began a long winding road of dealing with loss and finding an outlet for my grief. I don’t believe in coincidence, and there were an extraordinary number of occurrences which could have been attributed to coincidence. I know that sometimes we have an angel (or angels) on our shoulder which lead us down paths meant to be traveled. And so began my journey writing Finding Grace.

This is my first book, but it is made up of numerous stories about characters that are woven together as part of Judith’s journey home, along with her own story that continues once she arrives there.

Absolutely. It’s actually the subtitle of Finding Grace. “In a world that sometimes seems out of control, we are each on our own journey in hope of finding grace.”. That, along with what really matters in life is not material possessions, but our connection with people who we love and who love us in return.

That to do it right, it’s a LOT of work! LOL

Working through my grief of losing Sharee during the writing process. I first wrote the screenplay for Finding Grace, but quickly learned that it was MUCH more work writing a novel as compared to a screenplay or script. A screenplay is primarily the dialogue between the characters with some minimal detail about the day and location of the scene. In a novel, you must create a living, breathing world, researching every detail and nuance to bring that world and the characters in it to life. Those details and how they are woven into the story are critically important. An example was Judith’s bus trip from Barstow to Nashville on I-40E. I planned on making that bus trip myself but then COVID-19 hit. My solution came thanks to YouTube. I searched and found video recorded from each city to the next along Judith’s journey that was taken by truck drivers, students, and retirees driving their RVs. I was able to experience every mile virtually and while it certainly wasn’t the same as being there, it helped tremendously.

Thank you for your time and answers.

You can buy the book at:  Amazon or B&N: