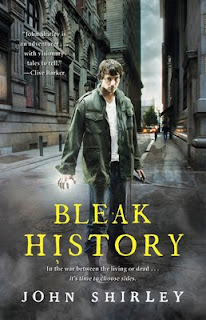 A young man with special skills and mysterious connections to another plane of existence searches for both his identity and his brother in an urban fantasy.   Gabriel Bleak spends his life on the run avoiding entities and agencies that want to take advantage of his special skills.   His experiences and the people he meets help him to define his own purpose.  Ghostly apparitions both plague and guide him on his quest.  A near future terrorist attack fuels the paranoia that creates a government long on control and light on the Bill of Rights.  That paranoid government creates an agency that seeks to gain control of any paranormal assets.

I liked Gabriel Bleak.  He was a reluctant hero facing daunting odds.   His unwillingness to use deadly force in every confrontation made him see more real and less two dimensional Marvel comic material.   The Chinese puzzle of interlocking government agencies with questionable oversight was frightening, precisely because we have seen such manifest fiascos spread over the front page for the less few decades.   I'm not an occult fan or fascinated with the supernatural and I liked this book anyway.

Body of work of John Shirley