The Green Man or Charlie No-Face 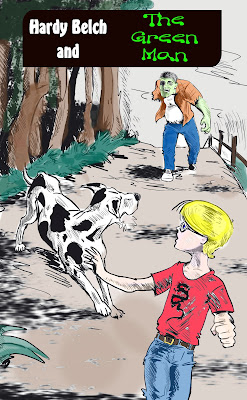 in the dark of night.  The mysterious figure is supposed to have green skin and no face!

As in many legends there is a grain of truth.   There actually was a man by the name of Raymond Robinson who wandered the dark roads of Beaver County in the 1950’s and 1960’s.

From Wikipedia: Robinson was eight years old when he was injured by an electrical line on the Morado Bridge, outside of Beaver Falls, Pennsylvania while attempting to view a bird's nest. The bridge carried a trolley, and had electrical lines of both 1,200 volts and 22,000 volts which had killed another boy less than a year earlier. Robinson was not expected to survive; he lived, but he was badly scarred and lost his eyes and nose, one ear, and one arm.

Having grown up in Western Pennsylvania, I had first hand knowledge that Raymond was more than a legend.   My cousins and my sister had given him cigarettes and food more than once.   He was a frightening figure but was truly harmless and just wanted to avoid notoriety.  He lived in Koppel, PA.

Tisha York, actually filmed his life in 2007.  She was the wife of one of my old childhood neighbors and also a native of my old home town.   A film maker, she documented the life of Raymond.   I corresponded with her to find out when the movie would be available and was told that the movie was in the “can” but due to the economy there was no money for distribution and release.   So perhaps sometime in the future we will be able to see a film featuring many of the Koppel area residents telling the story of Raymond.

I used Raymond as an example of intolerance.   Everyone Raymond met was not accepting of his disfigurement.   Consequently he was leery of any strangers.   In my story, Hardy Belch as the protagonist is frightened and dismayed on his first encounter with Raymond.   Tiny, his telepathic dog, found nothing wrong with Raymond.   The story is a tale of discovery and acceptance of those who may be different from whoever “we” are.   I was fascinated with the tale of the Green Man as a boy and I hope the use of this urban legend will be a good vehicle to demonstrate the dangers of intolerance.

The urban legend inspired this story but it is not intended as a historic document or an accurate portrayal of Raymond Robinson.  Its intention is to be a story for children demonstrating the need for tolerance.

Released Today on Kindle:  Hardy Belch and The Green Man at $.99

This book may have been received free of charge from a publisher or a publicist. That will NEVER have a bearing on my recommendations.
Posted by wbentrim at 9:59 AM