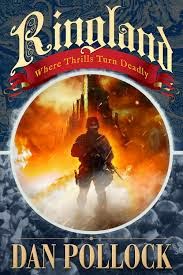 The fact that the story takes place in a amusement park would make one think of a light hearted, amusing adventure and one would be wrong!  Ringland, an amusement park influenced by Wagner, is under siege by environmentalists and terrorist which may possibly be one and the same.

Pollock stocks his pond with a wide variety of fish.   Not only do you have the corporate capitalist, you have the American Military, the German police, the FBI, Harley riding thugs and blonde, blue eyed Amazons!

The story has a nicely complicated plot.  You may deduce the villain early on but you as well as the book's characters have no proof.  The emotional aspects of the story are focused on loss, by Quinn and by Karolina.

Although fiction, the author points out the almost inevitable collision between the diverse thoughts of progress, profit and environment.

I recommend it.   BTW there is some kinky sex that my offend sensitive readers, this is NOT a YA book.