Deep as the Marrow by F. Paul Wilson 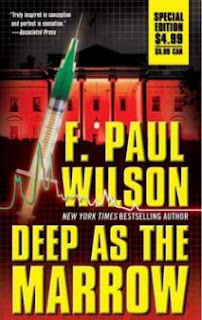 This is a stand alone book and not related to the Repairman Jack series.  John is a physician whose best friend ends up being President.   Their relationship is the source of the issues in this novel.

John and Tom (the President) have a friendship that dates from elementary school.  Still fast friends, decades later, John finds himself as the President's personal physician.

The turning point in this idyllic bromance is defined by Tom's decision to decriminalize illegal drugs.   does a great job pointing out the benefits of decriminalizing drugs.   Noting it is a social issue that would be better served by legalization and the resulting taxation rather than filling the prisons with users who have, for the most part, never been abusers or criminals in any other way.   Frankly makes quite a cognizant presentation on the legalization issue.

Regardless of the rationality of the arguments which do make a lot of sense, the process imperils the enormous profits of the drug cartels.

This leads to action that threatens John's family and it's well being.

This was a compelling story and well worth the read, I highly recommend.

This book may have been received free of charge from a publisher or a publicist. That will NEVER have a bearing on my recommendations.
Posted by wbentrim at 10:01 AM