No Grey Areas by Joseph N. Gagliano, a memoir. 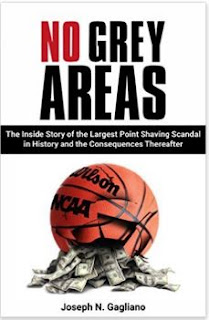 A riveting read, his ripped-from-the-headlines true story will both captivate and inspire you. With the infamous point shaving scandal serving as backdrop, Gagliano ­ the man who orchestrated one of the largest scandals in sports history - tells a tale of greed, corruption and the pursuit of redemption.

Reminiscent of The Wolf of Wall Street and MoneyBall, this gripping personal life story will carry the reader through the internal struggles of poor life choices and fortune squandered. It is a captivating journey of morally questionable decisions, and the pursuit of freedom, all during a harrowing ride to redemption.

Looking back, I¹ve learned to break life down to its simplest form.
All life choices are black and white‹right and wrong. There are no grey areas.
~ Joseph N. Gagliano

Here is the link for the book on Amazon.

In 1994, Joseph N. Gagliano calmly sat back, put his hands behind his head and smiled as the NCAA clocked ticked down the remaining last seconds of the game. It was the third game in a row Joe had bet on where the point spread had to land on a specific number. With millions at stake, was he nervous? Not at all. As the buzzer sounded on the 3rd game, his duffle bags were filled with over $5,000,000 in cash. How? Joe had fixed the game.

No Grey Areas tells the incredible, true story of the man who orchestrated the largest sports point shaving betting scam in sport¹s history. But that is only where the story begins.  It is always the cover up, not the crime, where white collar criminals get caught.

Joe was caught, convicted and served time in Federal prison for his role in coordinating and financing the 1994 ASU point shaving scandal. His journey continued as Joe came out of prison in late 2000 with a passion to clear his name and a desire to remove perceptions held by others of him. He embarked on an aggressive path to success; building a sizeable chain of full service car washes, making millions in real estate, living a life of luxury, and even buying a private jet just to get to his yacht in quicker.

But the story does not end there. Being an easy target, with the financial collapse of 2008, Joe's decisions and grey areas entangled him in another felony. In 2013, he went away to Federal prison again.

Inside these pages, you'll get a backstage pass on what it was like to slowly fall into the grey areas of greed, corruption, money, and business. Joe's brutally honest, detailed telling of this life of infamy, history, and successes along with the consequences of his decisions will amaze and inspire you.

This book may have been received free of charge from a publisher or a publicist. That will NEVER have a bearing on my recommendations.
Posted by wbentrim at 9:53 AM