The Last Mile by David Baldacci 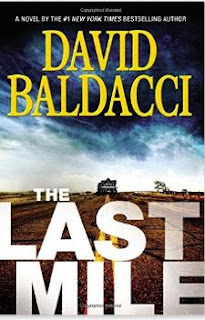 Melvin Mars was a shoo in for the NFL until he wasn't.   Convicted of the murder of his parents, Melvin is on death row in , the state that tries to out do all other states for capital punishment.   Amos Decker suffers from synesthesia and has eidetic memory.  His memories as a football player being run over by Melvin Mars are one facet that draws him to invest in an investigation of Melvin Mars.

Agent Bogart has created a mixed task force of talented civilians and agents to tackle cold cases.   Amos Decker's attributes and his former career as a cop guarantees him a place on the team.   A psychologist, a journalist and another FBI  agent fill out the team.   Amos focuses them on Melvin and the resultant action leads the entire team into danger and intrigue.

Baldacci is a master story teller who never seems to run short on excitement of plot.

This book may have been received free of charge from a publisher or a publicist. That will NEVER have a bearing on my recommendations.
Posted by wbentrim at 5:14 PM