Alliance of Shadows by Larry Correia and Mike Kupari 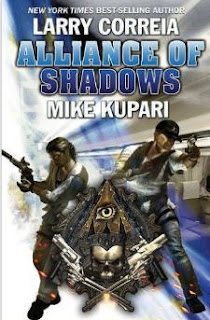 Alliance of Shadows is the final book in the trilogy that began with Dead Six, and was continued in Swords of Exodus.  I have not been lucky enough to read either of the preceding books so I can't comment as to how this fits with them.   This is an action adventure that takes place primarily in .   International groups such as Exodus, Majestic and the Illuminati are part of the cast.  The only one with much back story is the Illuminati.   A renegade Illuminati is running amuck.  Nuclear weapons are missing and a band of misfits from several organizations end up being the only defense the world has even if they don't even know the misfits are involved.

Michael Valentine and Hector Lorenzo who have apparently been at each other's throats in previous books are allies in this book.   The Oracle and Sala Jihan are the only whoowhoo factors in the story.  Whoowhoo being supernaturally related.  The rest of the story seems pretty straight forward pseudo-military action adventure.   Character interplay is entertaining and the plot is convoluted enough to maintain interest.

This book may have been received free of charge from a publisher or a publicist. That will NEVER have a bearing on my recommendations.
Posted by wbentrim at 5:16 PM