The Lost City of the Monkey Gods by Douglas Preston 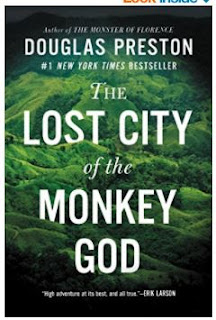 I went into this book expecting the slightly over the edge of reality that seems to characterize some of ’s books.  That is not a criticism, I liked Impact  and The Codex.   I expected more of the same. This book is not a fantasy, this is an journey of discovery of a city that truly was lost in time.

was the home of a legend of a lost somewhere in the interior jungle.   Many explorers searched for the lost city and it’s treasures.  Some even claimed to have found it but were later exposed as frauds.   A film maker was bitten by the exotic bug of a lost city and organized several expeditions to find it.  Modern technology enabled a more accurate and thorough search.   Two cities were found and the author was covering the story for the National Geographic Society.

Most impressive aspects were the isolated nature of the terrain with the excitement of a monumental archeological discovery.   The exotic bug was not just an expression but a sad factor of jungle exploration.  Many members of the team were bitten by sand flies that carried the parasite that causes leishmaniasis, a disease I had never heard of.   A good portion of the book was the description of that particular disease and the impact of disease on the indigenous population of the Caribbean and the .

The author spends some time talking about the invasion of diseases formerly restricted to certain areas of the world and how air travel and global warming are impacting the spread of heretofore obscure diseases around the world.  points out that while these diseases were historically confined to the impoverished that today may be spread far beyond that population.

This was an interesting book with some sobering insights.

This book may have been received free of charge from a publisher or a publicist. That will NEVER have a bearing on my recommendations.
Posted by wbentrim at 4:54 PM