Into A Dark Frontier by John Mangan 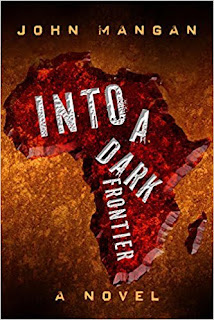 Whew!  The author has action and adventure nailed!  This was a hard book to put down.  In many places it was hard to read due to the brutality of the story but it was also very thought provoking.    is depicted as a new frontier after a series of events leads to a dramatic depopulation.   The protagonist is a former Seal who has been identified falsely as a terrorist.  The story is his fight against a corrupt system.


Mangan postulates some potential issues with the United Nations and with the “military and industrial” clique.   The “fat cats” are dictating what is being done by the “one world” attitude and the military.  (the quotation marks are my interpretation and not necessarily what the author intended.

The idea of political correctness running amuck and big brother rearing his ugly head is certainly alive in today’s headlines.  The best magicians focus your attention on their right hand while their left hand is lifting your wallet.   Focusing attention on professional athletes kneeling or not is clearly distracting attention from health care, national disasters and .   All of this taking place after Mangan paints similar behavior in his novel.

The author grabs you by the throat, shakes you around and then pushes your nose to the page.   I look forward to seeing more from John Mangan.   A little polish, a nudge here and there and you are looking at mega best sellers.

I highly recommend but don’t expect to like a possible future.

This book may have been received free of charge from a publisher or a publicist. That will NEVER have a bearing on my recommendations.
Posted by wbentrim at 11:42 AM