Love And Not Destroy by Sandra Carey Cody 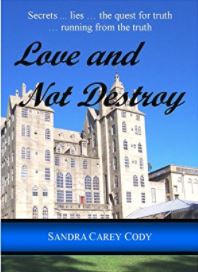 I consider Sandra a friend when she asked me to review her book she made it very clear she wanted an honest review.   She didn't want someone shielding her feelings from harsh criticism. The only harsh criticism I have is that I wish I would have read her book sooner.

I read the book and frankly I was stunned at how good it was. When asked to review a book by a friend, you do so with some trepidation.  I'm obsessive about being frank and honest in my reviews.   In my head, I calls them as I sees them.  The beauty of Sandra's book is I don't have any need to feel badly about my reactions due to how much I enjoyed the book. Part of it was the enjoyment of knowing the locale of the crime.  You could safely compare it to the early works of Michner that also starred Doylestown.

I have to admit I was dismayed over the naivety  of Peace.   However it is important to keep in mind she was 22 years old in the book.  I guess that naivety could be explained due to age.  Plus the locale of Doylestown tends to make you naive.

Sandra kept the mystery going all the way to the end.  The plot was quite intricate. It included a wide variety of characters.   A lot of them familiar, not familiar as other authors using them,  but familiar as they could be people that you know.  Identifying with the characters good or bad often promotes the enjoyment of a story and this case looking at some of the people their families and their pain really made one introspective as to how you treat others.

I have seen Daniel multiple times throughout both Doylestown and other places I visited not Daniel the character but Daniel the stereotype.  There are so many of these lost souls who just want someone to touch them and recognizing their existence.  They want to have their own identity and not be a carbon copy of their parents.

I highly recommend the book.  Not to just the people who live in the area but  to anyone who's ever lived in a small town,  you're going to recognize many of the attributes typical of a place like Doylestown

This book may have been received free of charge from a publisher or a publicist. That will NEVER have a bearing on my recommendations.
Posted by wbentrim at 10:51 AM