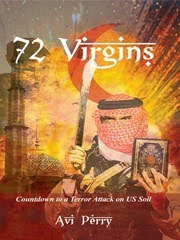 This is a novel that reads like current events or history.   The story of an Israel who infiltrates a terrorist cell is fraught with peril.   The story paints a dim picture of the ethics of the Intelligence community.

I found the story frightening.  The games played by the Intelligence community were dismaying at best.  The sad part is that it is easy to see why draconian methods are applied to terroristic situations.  The brutality of the terrorists is played in counterpoint to their total disregard for human life, both their own and their victims.  Our culture generally finds it impossible to understand a culture that lionizes suicide, particularly suicide that is so destructive to others.  For some reason I found the story stilted and I couldn't identify why I felt that way.   It didn't read easily but that may have been the topic.

The book was informative and painted a very vivid picture of fundamental fanatics.


Body of work of Avi Perry