Surrender None, The Legacy of Gird By Elizabeth Moon 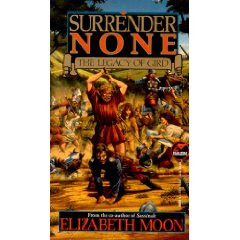 In a land far, far away, evil overlords trample on the rights and lives of the poor peasants. Oddly enough the peasants take severe umbrage to this and revolt. This book details the causes of the rebellion, sets up a protagonist to lead the rebellion and details the successes and failures of said rebellion. Unusual in this genre is the awareness that something has to fill the void if the government is thrown down. The detailing of what to do and how to do it fills the pages. The angst suffered by Gird and his willingness to suffer for his people make up the focus of the story. Moon has the ability to define protagonists clearly, illustrating not only their strengths but their weaknesses. Her characterizations are detailed, believable and enjoyable. I found the ending unsettling and felt she could have closed this book with a bit more detail. Regardless, I really enjoyed the book and look forward to starting the sequel, “Liar’s Oath”.

Body of work of Elizabeth Moon