An Echo Through The Snow 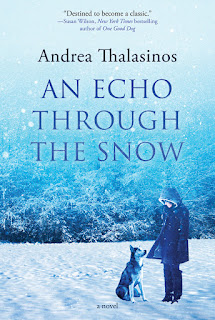 MADISON, Wis. – It's 1992 in the Red Cliff Indian Reservation on Lake Superior and Rosalie McKenzie has several lifetimes already packed into her 18 years, including a long line of dead-end jobs and a destructive marriage. Stuck and feeling hopeless, she can only envision a bleak future for herself...until she meets Smokey.

The exquisite Siberian husky is suffering greatly from neglect, and Rosalie, moved by more than just a gut feeling, sticks her neck out and rescues him. United by a bond deeper than love, the two become a natural pair as they enter the world of competitive dogsled racing. Curious about the history behind this sport and ancient breed of canine, Rosalie digs around and discovers a rich background colored by tragedy and maybe even the supernatural.

Through of a series of mysterious events, her life begins to intertwine with that of Jeaantaa, a young Chukchi woman from eastern Siberia, who lived in the early 1900s. When Stalin's Red Army displaces the Chukchi in 1929, many were killed and others lost their homes. Jeaantaa's devotion to her Huskies, called Guardians, creates a rift with her husband and with the ancient ways of her people, and her stunning choice haunts her family for years to come.

When Rosalie's life in the present day begins to summon the spirit of Jeaantaa, all the strength and potential she failed to see in herself earlier can no longer be denied, and the two narratives meet together in a dramatic present-time conclusion.

An Echo Through The Snow (Forge, August 2012, Hardcover, $23.99) is ultimately a story about the relationship between unlikely people who forge ahead with the belief that a better world is possible.

"Much of my inspiration for this novel has come from watching my students over the years," says Thalasinos, a sociology professor. "It's been moving to note how resilient they are; how they bounce back from trauma and move on to find their lives and save themselves."

For ANDREA THALASINOS, it was the newspaper ad that changed everything. A husky puppy needed a home. Thalasnios, a sociology professor at Madison College, and naturally curious about origins, delved into research about this particular breed. What she found out about these little-known historical and political events spanning 60 years; they inspired a novel. She lives in Madison, Wisconsin with her own dogsled team. Find out more on www.andreathalasinos.com.

This book may have been received free of charge from a publisher or a publicist. That will NEVER have a bearing on my recommendations.
Posted by wbentrim at 5:00 AM

I enjoyed this book!