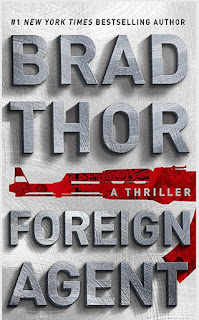 Thor has read the headlines and formed a sadly believable scenario.  The is still plagued by and has suffered some sort of national disaster in the previous book.  The Russians are also under siege by Islamic extremists.  Enter the off the books secret assassin, Scot Harvath.

Thor's plot is deviously clever and disturbingly diabolic.  He does a ton of action and has sufficient plot twists to maintain interest.   There was mention of which really drives home the current nature of the book.   Thor also shows that all Islamic people are not extremists and that many of them are suffering greatly when under extremist control.

This was a rousing and fast paced book.

This book may have been received free of charge from a publisher or a publicist. That will NEVER have a bearing on my recommendations.
Posted by wbentrim at 10:33 PM