The Escape by David Baldacci 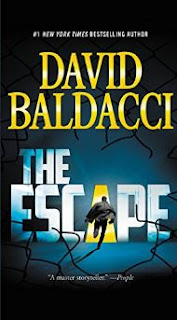 John Puller, an Army CID investigator, despairs over his father's dementia and his brother's imprisonment. Father a renown three star, fighting General and Robert a fast track Air Force Major who allegedly committed treason are both a disappointment to straight arrow, John Puller.

Not really a spoiler if I mention that Robert Puller escapes from prison, considering the title of the book.  National security is threatened, genius Robert Puller is known to have a wealth of marketable secrets.   Surprisingly against all regulations, brother John is one of many tasked to track down his elusive brother.

John Puller finds himself teamed up with Veronica Knox, who he knows belongs to some intelligence agency but he really isn't sure which one as Knox appears to be unable to avoid lying.  John Puller does not trust easily and Knox does not provide him with any reason to trust her.

There is a wealth of action, a very involved plot, nobility and honor, in other words a typical Baldacci book.

This book may have been received free of charge from a publisher or a publicist. That will NEVER have a bearing on my recommendations.
Posted by wbentrim at 9:20 PM