The Bone Tree by Greg Iles 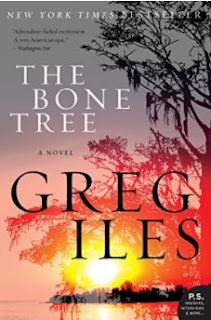 Greg Iles is a master of tension.   I think I start all his book reviews with that compliment.   This book matches Dead Sleep and Third Degree tense moment for a tense moment but adds the disturbing note that much of the depicted violence actually took place.   Natchez Burning began this trilogy.  The story continues in this, the second book.   Be warned, it is hazardous to develop any attachment to a character as they may not survive.

Although repetitious,  I'm old enough to recall civil rights violence.  This book deals with the KKK, a splinter group of the KKK, the Double Eagles; a crazed bootstrap

millionaire; a crusading journalist and a family with a troubled past.   If that is not enough to pique your interest then you apparently have little or no imagination.

This too was a hard book to read.  History is sometimes very painful.  As troubled as our current climate is regarding race, it has been worse.   That was hard to read and to realize the depravity that was novelized was reality based.

There are some shattering discoveries in this volume.  As an aside, Iles certainly has great respect for the violence that can be perpetrated by elderly folks, male, female and good and bad.

This book may have been received free of charge from a publisher or a publicist. That will NEVER have a bearing on my recommendations.
Posted by wbentrim at 11:01 AM