The Marauders by Tom Cooper 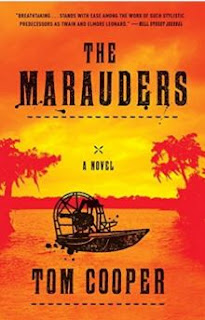 The setting for this book is .    I googled that and the setting is daunting to say the least.  The 2010 census has roughly 1000 people in the entire area.  The BP oil spill and Hurricane Katrina really set the stage for this book.   The story is about a group of loosely connected people who all seemed to be at the sharp end of the stick of life.

Cooper did a superlative job painting the life of what could kindly be described as misfits.   The Troup twins seemed like the most successful and at the same time most brutal of the characters.  The life style of the water people suddenly made my time working in the steel mills seem like a veritable picnic.

The book felt disjointed but the tendons and gristle of the environment kept the story from flying apart.  The character interaction provided the connectivity that breathed life into the plot.    After awhile you would swear you were smelling mildew and swamp gas.

The book provided a glimpse into some life styles that in many ways seemed utterly hopeless but also depicted the resiliency that people will show to maintain a traditional way of life.

This book may have been received free of charge from a publisher or a publicist. That will NEVER have a bearing on my recommendations.
Posted by wbentrim at 12:11 PM